Patrick was born into a Christian family in England in a place somewhere between the Rivers Severn and Clyde.

At approximately 16 years of age, he was captured by pirates and taken to Ireland where he was kept as a slave for 6 years.  So profound was this experience that after having escaped back to England, he returned several years later to Ireland as a missionary, determined to convert the pagan population to Christianity.  Although there were small areas of Ireland who were Christian, the majority of people worshipped the Sun and pagan idols.  Due to his charismatic personality and Christian zeal, he was able to gradually win people over and to convert them.  On the eve of Easter Sunday he set the Paschal bonfire ablaze on a hill in Slane, County Meath so that everyone could see the “light of Christ”.

He spent the rest of his life preaching the Gospel, founding many religious houses.  St Brigid of Kildare, who is part of our series on the Saints, was one of his helpers.

In the picture of him included with this article, you will see a couple of snakes at his feet because legend has it that using his Holy Staff he expelled all snakes from Ireland.  This image can also be interpreted as God’s banishment of the serpent from the Garden of Eden as described in Genesis.

He encouraged a cloistered life leading to a deeper devotion to Christ and all of his works.

If you are considering going on pilgrimage this year, you may like to consider going to Ireland and in particular to County Mayo.  For on the last Sunday in July, thousands of pilgrims climb Croagh Patrick in honour of Saint Patrick, who according to tradition, fasted and prayed on the summit for forty days in the year 441.  Masses are held at the summit in a small chapel.   Even from ancient times, pilgrims have climbed the mountain barefoot, as an act of penance and this practice continues to this day.

Although St Patrick was never canonised because at the time that he died, such a ceremony did not exist in the Catholic Church, he was regarded as a Saint because he lived his life in the path of righteousness as a missionary and he was known as the “Apostle of Ireland”.

You may have heard that shamrock is said to have been used by Saint Patrick to highlight the Christian doctrine of the Holy Trinity when Ireland was Christened in the 5th century. The first evidence of a connection between St Patrick and the shamrock appeared in 1675 on the St Patrick’s Coppers or “Halpennies”.

He died in 461 A.D. and his reputed burial place is at Down Cathedral in the town of Downpatrick, Northern Ireland.   It stands on Cathedral Hill overlooking the town.  You will see a large memorial stone in the front of the picture.  This was put in place during the 1900s in order to protect the site due to the large numbers of pilgrims who visited there.

Beatitudes for a Global Pandemic 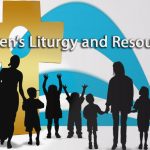