Teresa de Capeda y Ahumada was the ninth child born into a wealthy family in the Spanish town of Avila, near Madrid on 28th March 1515.

The house where Teresa lived no longer exists.  However, in her honour the Convento de Santa Teresa Church was built in 1636 on the site of where her home had once been located.  There is a bronze statue of her sitting outside.

As a child, Teresa was a tomboy –  full of fun, possessing a lively spirit.  Sadly  when she was 13 years old, her mother died.     Teresa then began to suffer long periods from poor health. It was during one of these times  that she began to read the works of St Jerome.  It was he who had translated the Bible into Latin in the 4th Century and it is known as The Vulgate.

Inspired by what she had read and her ever deepening belief in God, she decided that she wanted to fully dedicate her life to Him and she joined a Carmelite convent at the age of 20.  Here was a young girl who had enjoyed all the aspects of life, but had chosen to reject this way of living in order to dedicate herself entirely to prayer and self-sacrifice.

“May you be content knowing you are a child of God.”

Once more Teresa became seriously ill soon after having taken her vows.  During this period, she was given a book entitled:  The Third Spiritual Alphabet by Francesco de Osuna.  It greatly influenced her spiritual development.  It also encouraged her to think about her relationship with God in terms of friendship and love.  She was also influenced by reading:  The Confessions of St Augustine.   It was at this time, she began to receive heavenly visions.  During the next 20 years, her faith deepened and she sought a more austere life.  So using the wealth of her family, she founded a reformed convent in Avila.    It was to follow the life of the Carmelites based on their 12th century Rules i.e. rejecting comfort, possessions and limited contact with the outside world.  There were to be no distractions, therefore, allowing total concentration on prayer.  This Carmelite Order became known as Discalced which means Unshod.

“May you not forget the infinite possibilities that are born of faith.”

Teresa travelled all over Spain preaching and over time opened another 16 Convents.  When she was 52 she met Juan de Yepes who later was named St John of the Cross.  Juan was 25 and a newly ordained Carmelite priest.   He was considering becoming a Carthusian monk, but Teresa needed assistance in reforming the male communities of the Carmelite Order also, so they joined forces in order to do this work.

She was a prolific writer including her autobiography entitled:   Life.  In it she describes her mystical experiences.  Teresa also wrote The Interior Castle and The Way of Perfection.

“Let us remember that within us there is a palace of immense magnificence.”

Her total dedication to God and His divinity came to an end on 4th October 1582 having died of cancer.

In 1622, she was canonised by Pope Gregory XV and became a patron saint of Spain.

In 1970 she was elevated to Doctor of the Church by Pope Paul VI the first woman to be so honoured.

Today there are approximately 2,500 Carmelite nuns and friars in 80 countries around the world.

Thank you for reading and God Bless,
Grania Egan

“Mary sustains our journey toward Christmas, for she teaches us how to live this Advent Season in expectation of the Lord. For this time of Advent is a time of waiting for the Lord, who will visit us all on the feast, but also, each one, in our own hearts. The Lord is coming! Let us wait for him!”
Pope Francis

eNewsletter for 1st Sunday in Advent

The Deacon by Deacon Dave Skillen 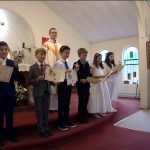